Pardon my algae and rate my tank!

Amazingly hard to get an in-focus picture of the danios, even with the fastest shutter speed on my camera. Fast little buggers! Also, I'm classy so I have lots of algae. The new otos haven't managed to tame it yet, although there is lots of fresh algae-free growth since I added them to the tank.

Let me know what you think. Let's see if I can actually add pictures...

Hello; I see the photo listings but cannot get them to a point of viewing. 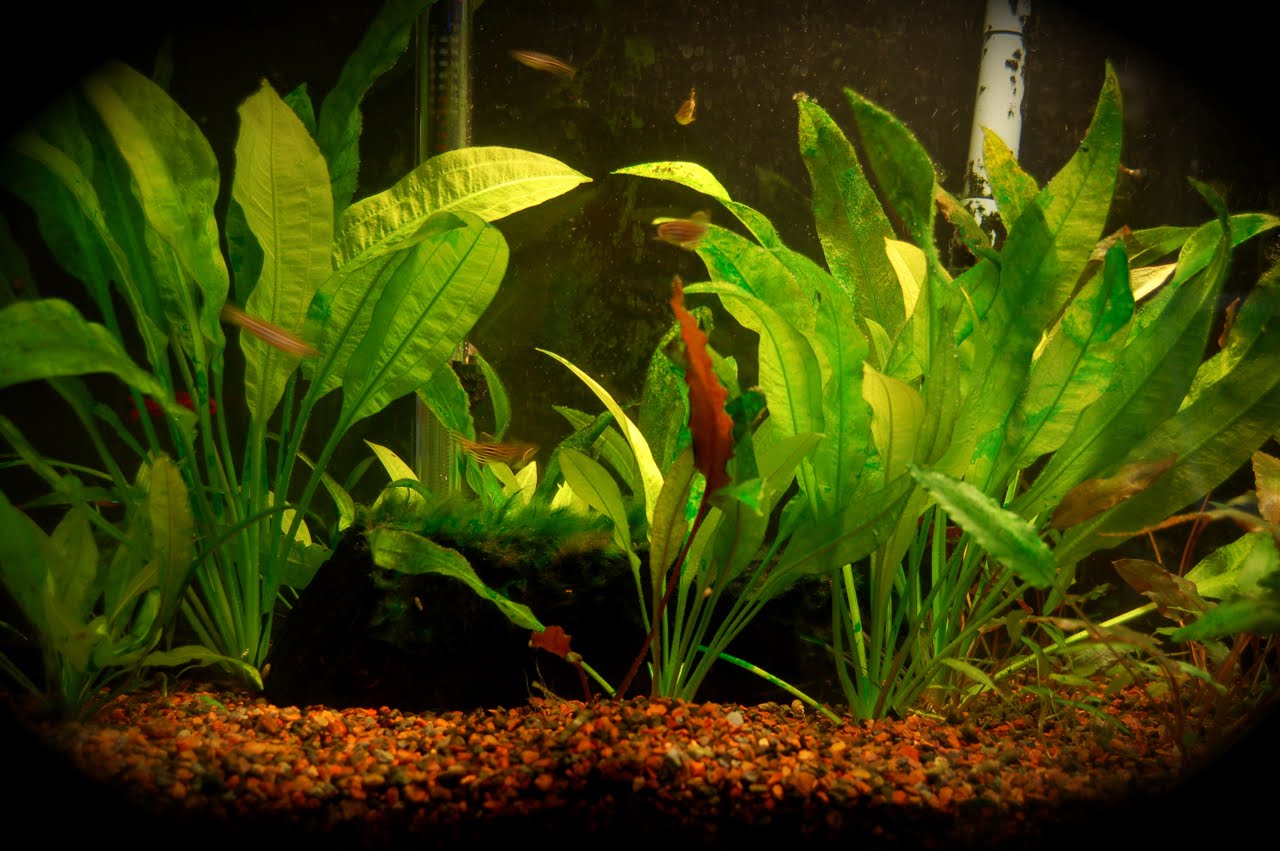 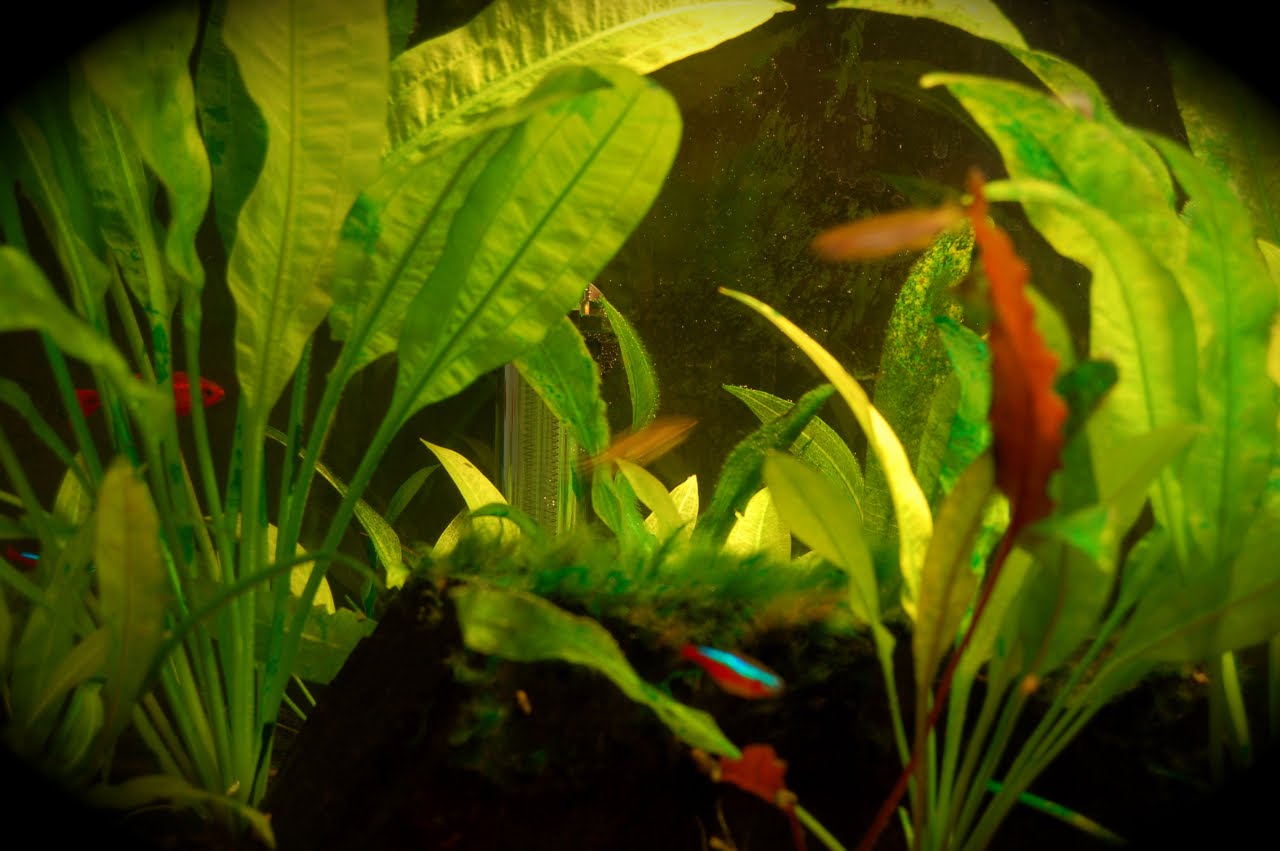 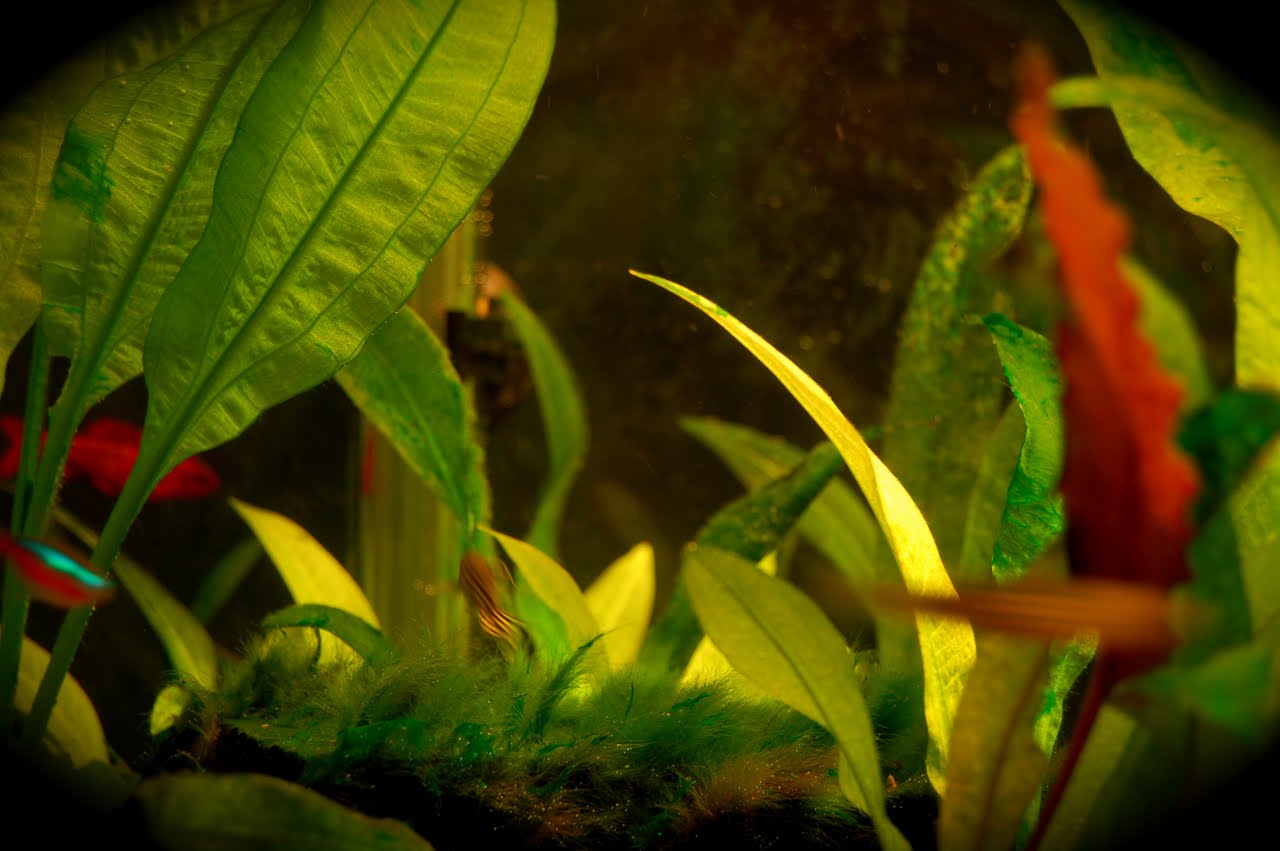 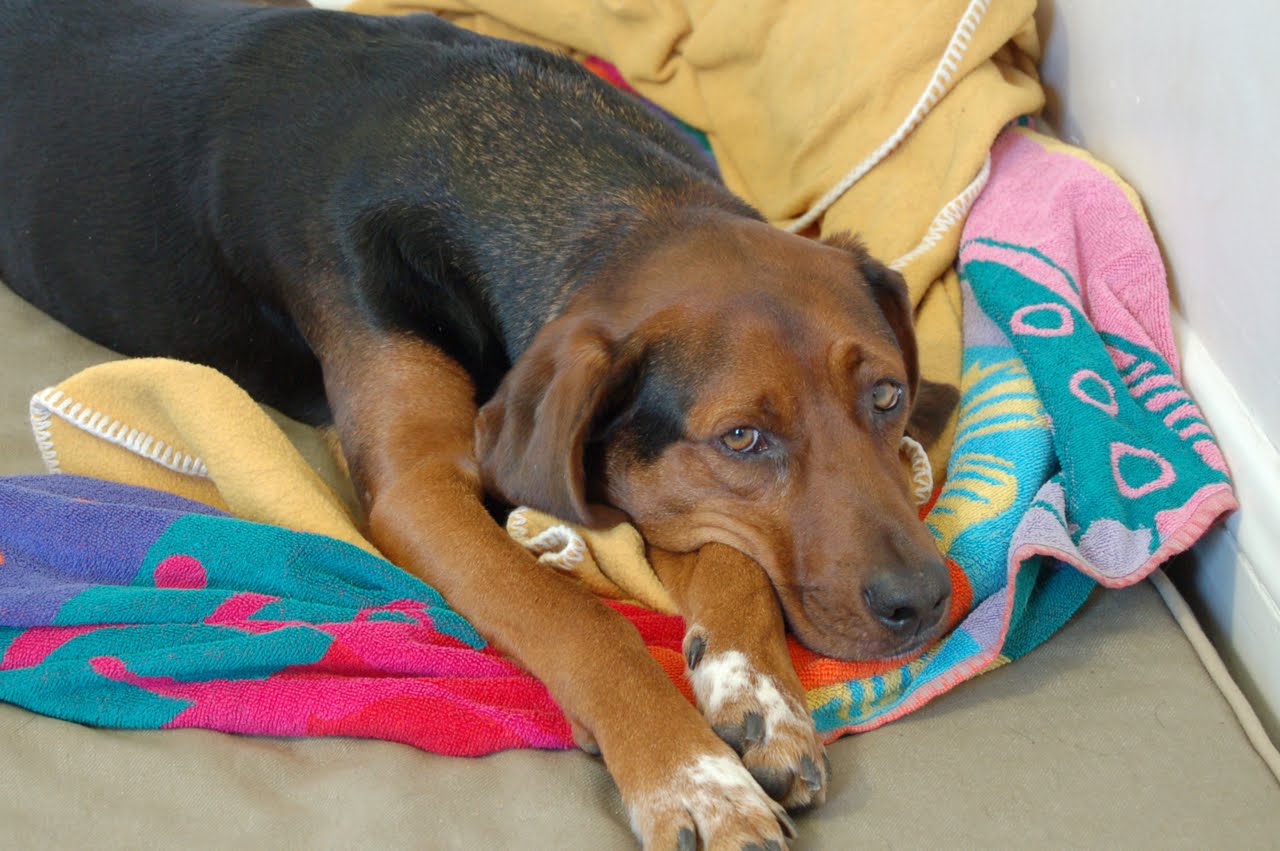 The last one doesn't actually live in the tank, but trust me, 9 months of the year he is aquatic.

Nice pics, pate! Your plants look so healthy. Would love to see a full tank shot if you have time!

What plants do you have in there?

Actually, the first pic is a full tank shot. I just cropped out the algae-ified silicone edges. That's all she wrote. You may need to scroll a bit to the left or right to get it all on your screen. I should have saved my jpeg as the next size down. Oops.

As for plants, I've forgotten the scientific names since it's been a few years since we put them in there, but... two species of crypts (one red, one green), the ubiquitous amazon sword, and a curly, ruffle-edged val of some sort in the back left corner.

Hello; Very nice setup. I can see the pictures now. I accept algae as a part of the deal. I have had some success keeping it in check with the rams horn snails. I believe there are some trumpet snails in one photo. I have them as well but only see them out of the gravel and mainly in the morning when the lights first come on.

skj, yep, there are malaysian trumpets in there. Well spotted! There are definitely more of them out at night, but usually a few cruising around during the day as well in our tank. Maybe this means it's nice and shady in there in the shelter of the sword leaves or that our collection of fish is particularly non-threatening. I dropped some pellets in the tank to try to get the fish concentrated in one area so I could get a group photo. Fail! The filter scattered the food all over the tank and the fish scattered with it. The snails may have smelled the extra treats and popped out.

I wish I could get some nice green fluffy algae. All I get is the black beard algae of death.

All I get is slimy, microscopic, never can see algae. How do you get algae to grow like that?? And what types of fish will eat that algae?? My water is green, but you can't "see" the algae.

Ha! I think it depends on your water as much as anything else. I don't know if anybody eats the fluffy green algae. Maybe some of the shrimps did back when we had shrimp. (Cherries and Amanos). Fortunately, it seems to just be a product of the chemistry of our big rock, so it doesn't grow much anywhere else in the tank. What bothers me more is the brown and green plaques of algae on the plants, but the otos are whipping them into shape.

Awesome. How many Otos do you have?? I think I should get a few Pygmy Corydoras for my Algae Bloom Fry Tank. But, there might not be enough room. lol. I can't wait till I get my 150 fully set up.

Just two otos at the moment, although I'd like to have three. Our female seemed to acclimate okay, but then died a week later. We'll get back to the fish store soon and look for another. Add another pair of cardinals too, and we'll be fully stocked.

I'm very jealous of your 150 gallon. Maybe sometime we'll add a few more pillars in the basement to reinforce the 1st floor and go for something that big. I've always wanted to keep an oscar and with that size tank I could be sure I had a happy, healthy one... or a community tank with LOTS of schools of little guys. Would be fun to put together all the smallest compatible community species out there, so I could have great big schools of them. Herds of tiny pygmy cories roaming the rolling plains of a giant planted tank like tiny Holsteins... so sweet!

Awesome!! But I haven't even check my floor yet. I'm gonna laugh if when I get this set up it goes through the floor. My dad's gonna get so mad at me!! lol!! He's a mechanic and know's all about our house, so I'll ask him if it's safe to put in my room. Although, something that big might get put in our living room. That would be a nice addition. I'm just worried about my step-mom not caring if her 1 year old and 3 years old grandsons pound on the tank. They ruined my piano, so what are they going to do to my tank?!?! Maybe I can set it on an extremely high stand. Mwuahahahaha!!!

Hello; Two thoughts on a 150 gallon tank. Figure at least ten pounds per gallon set up with everything, maybe more. It can be more depending on the type and how deep the substrate and other decorations. Also the stand may be somewhat heavier than for the smaller tanks. More to maintain the rigidity of the support under the tank than just to carry the weight.

Second thought. You mention a one and three year old. I have set up tanks for people with children and once a 55 gallon in the waiting room of a local doctor. I secured the 55 gallon to the wall studs with a turnbuckle so that it could not be turned over. Even a smaller tank can be heavy enough to do serious damage if a child tried to climb up the front. You may also want to somehow secure the chemicals, food and electrical stuff with curious children in mind.

Yes, I just don't want them scaring my fish though. They pound on everything, scream, and run around the house like little banjies. My step-mom doesn't care and is too absorbed in Pogo to do anything. Like I said, they broke my piano. Mvaybe I'll set it up when Calvin (1 year old) is around 3. He's the calmer of the two. Also, what can I do when I go off to college?? Would I might be able to take my tanks with me (most likely not though) or what?? My dad will most definately kill all my fish. If anything, I'm taking my Tiger Platies and my Goldfish!!

Most colleges only allow 5 gallons of water if you live on campus. Off campus, you can do what you want

Freshman year might be tough, since you generally don't get to pick your roommate, but later you can be roomies with someone who's already a friend and they might love to have a tank in the room. Although space is an issue, and if you think little kids are rough on things, try drunk college kids. Sheesh. The bill for damage to our dorm building my freshman year was something like $500 per student. And there were maybe 200 kids in that dorm to give you an idea. My parents were REALLY pissed. It wasn't me and it wasn't my roommates, but any damage that no one fessed up to was split between everyone who lived there, so we got to help pay for it. I wasn't even in the rowdiest dorm and I went to a good college that didn't have a reputation as a party school. There was one kid who would get drunk and throw furniture through upper floor plate glass windows. I don't think anyone ever got hurt, fortunately. Guess his parents just kept paying for the damage. All you guys and gals who are on your way to college, don't be the drunk ******* in the dorm. It's not cute. Have a beer or two with your friends on Friday night and leave it at that.