I have a breeding pair of black skirt tetras and this morning the eggs hatched! I have a bunch of super super tiny fry swimming around in my 10 gallon "baby tank". Mom and dad were taken out yesterday. They are so tiny that if I wasn't looking for them I would never have seen them. Here's my question I hope someone can answer for me. I have mixed a tiny bit of cooked egg yolk with a few drops of tank water and made a watery paste and put a few drops in the tank. Even though it looked completely dissolved to me, once it was put in the tank, the water separated and the pieces of egg yolk are still kind of big for them. I'm going to the local pet store as soon as they open to get some newborn fry food. How often do I need to feed these little guys? I don't want to foul up the water because I think even with the sponge filter it would be too strong and suck them up- but I don't want them to not eat enough.. I have had lots of baby guppies, platys, mollies and Corey cats. These babies are much smaller than any I have ever had. Any advice would be appreciated! Thanks in advance! Happy Friday everyone! TGIF!!!!

Babies need to eat several times a day - if you have any mature plants / Moss / algae you can move some to the nursery tank and the fry will eat tiny microorganisms from them. Good luck!

Awesome, I already have plants in there. Yea! Thanks! Hopefully some of these little guys will make it! Got my fingers crossed 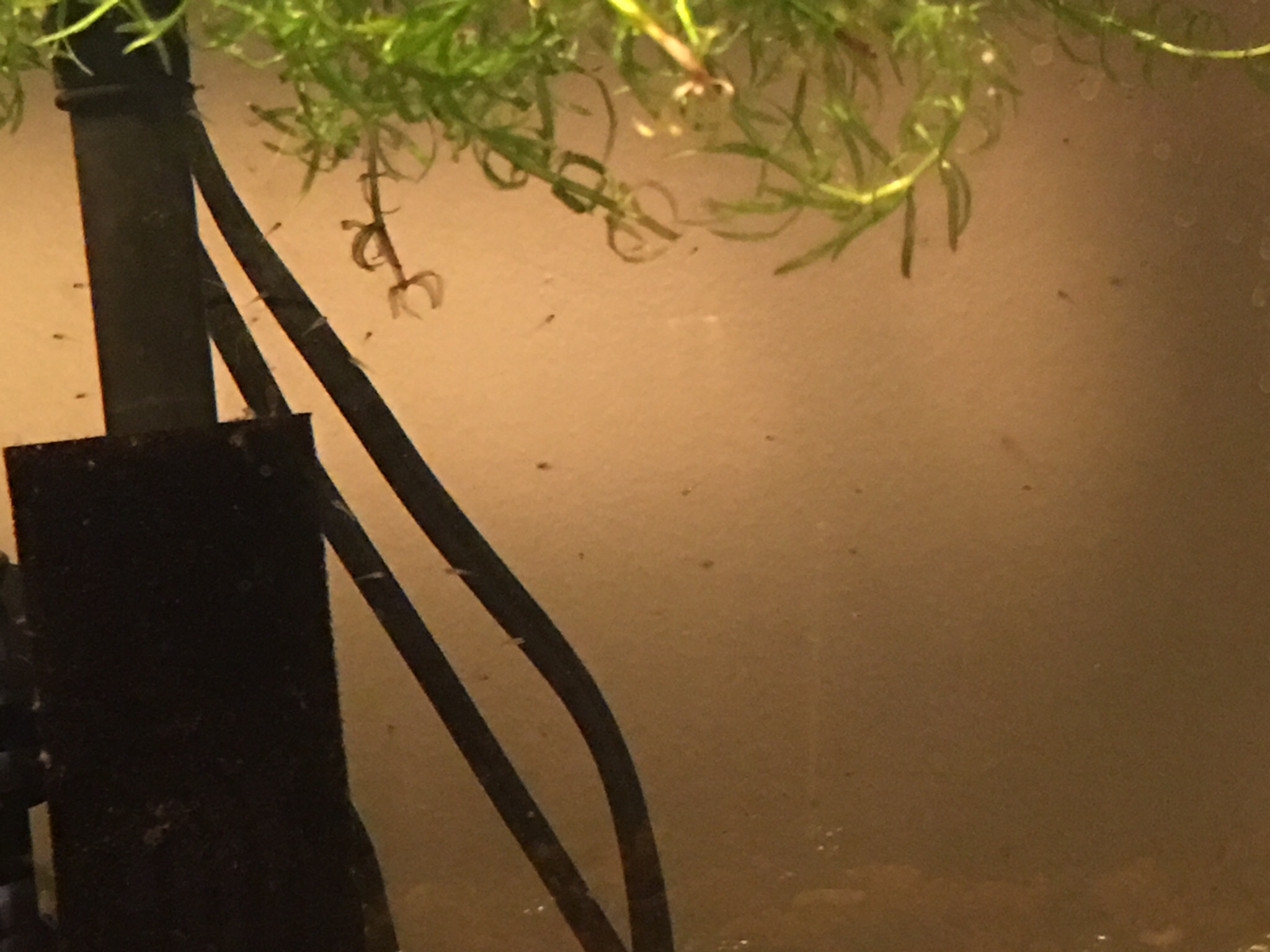 Very cool! I've never had any of my tetras or danios breed. You might wind up with a ton of them!

never was able to get any of my fw fishes to breed so seeing this is awesome! just had to say that. haha.

keep us updated with more pictures!

Thanks guys! I have been really lucky, I guess. My fishes are all in love! LOL!

They are super tiny! Good luck with them

Thanks! So far they're doing great! I think they're growing already! When they first hatched, I wasn't sure they were even fish they were so tiny! Now I can see them swimming around without having to search for them. If they all make it, I'm about to have a ton of tetras! LOL! I'll be looking for fishy homes for some of them for sure! Ha ha!

Ok so we made it through the 1st week! Black skirt tetras have grown a lot but are still super tiny. I have bought "First Bites" baby fish food by Hikari, and they are starting to eat that now, but funny enough, they prefer egg yolk. So I was getting worried because the bottom of the tank had "leftovers"from their egg yolk meals. I tried siphoning it out using just an air line, but I kept getting rocks stuck in the line, and would also end up sucking up a couple babies into the bucket. So I had an idea - I put a couple Cory Cats in there with them last night. This morning they had all of the nastiness piled up in a big ball in the middle of the tank and I just scooped it out with a net! These guys are amazing!! I think I'm going to have to start paying them, so they don't form a union and go on strike!

Good idea with the cities. I think the ease of siphoning is why most fry tanks tend to be bare bottom.

Yea, I think you're probably right! I just new I wanted to get the uneaten food out. The cories deserve a raise! They did a great job! LOL! 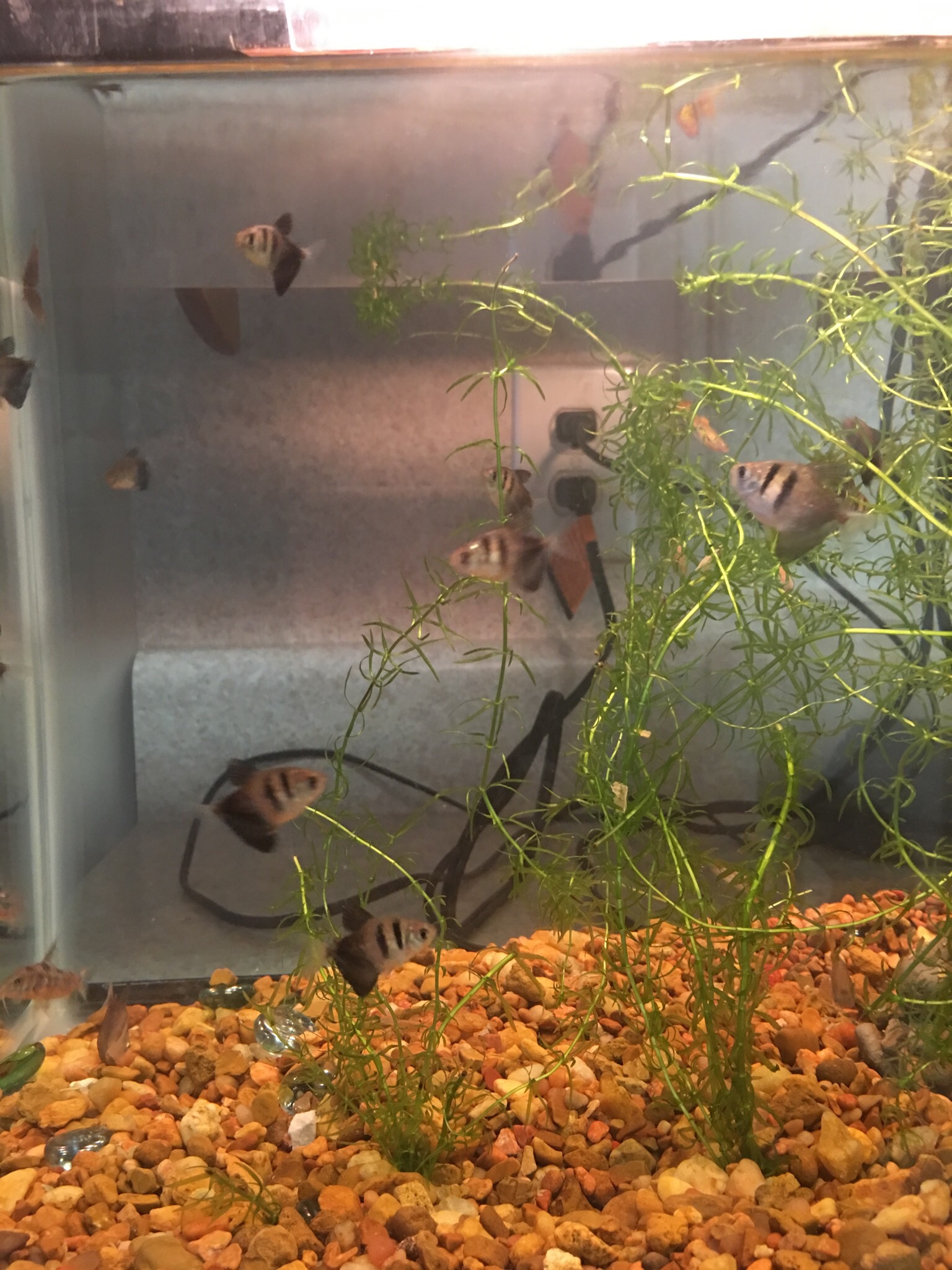 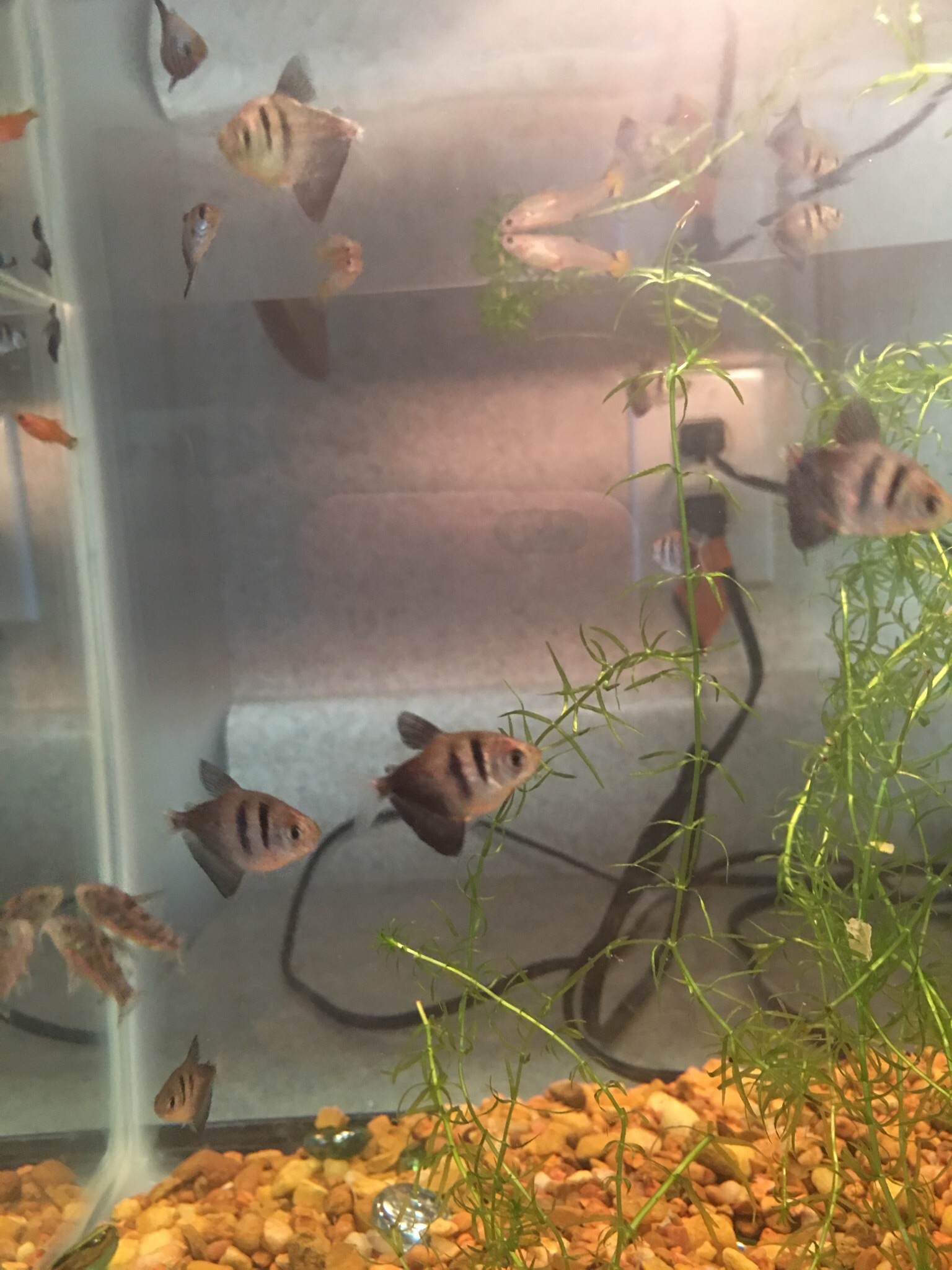 Nice turnout! I'm glad to hear they did well.